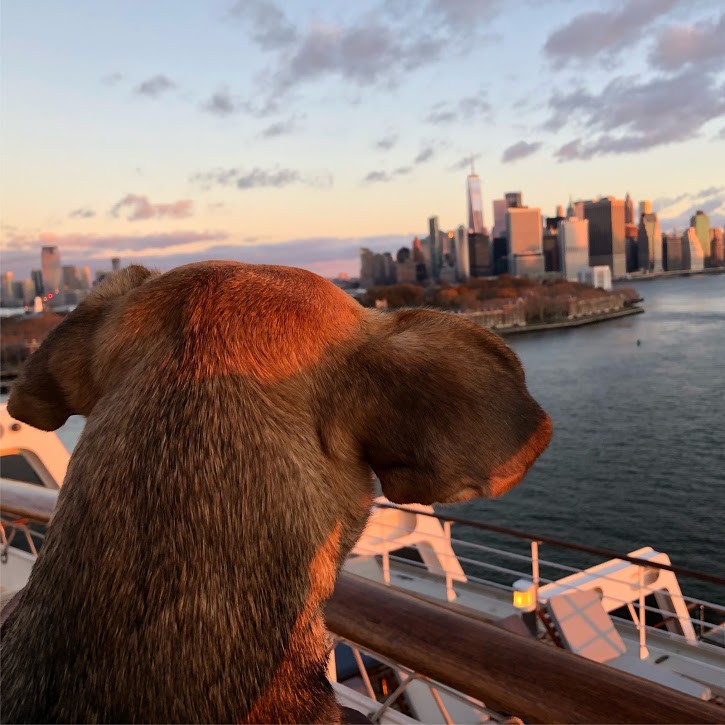 You want to take the dog to the States, but you don’t want to put it in the cargo area? Luckily there’s Curnard, the cruise for you and your dog!

Today I want to talk to you about a very important experience of my life. My transatlantic cruise with the Cunard company. But let’s start from the beginning. It’s been more than two years since my husband and I finally decided to move from Italy to the States, after having been lucky enough to win the green card at the Lottery, the various procedures, interview at the consulate, waiting for the positive answer and then finally the certainty of having it. There we had to think seriously about what to do, how to move and also SE seize this opportunity or stay in Italy close to our families, relatives, friends while keeping our jobs fixed and continue to look for home to buy. But in the end we decided that destiny had given us an opportunity and that at least we should try, so from there we had to think well about how to move, what to do, when, how, where. Our main thought was our hairy child, our dog Albert! Unfortunately, a lot of people who also have dogs never understood us too much and asked us what the problem was. “Go and leave the dog here, don’t you?” And indeed the question for them was really rhetorical, I still remember how lightly they told us phrases like: “The dog you leave to your mom, right?” Or when we said that we would find a way to bring it, they would look at us as if we were crazy. But I don’t want to judge them, we’re not all the same! Albert is really everything to us, he is our family, and since 4 and a half years ago he became part of our life, he is 100% part of it, from that August 10, 2014 we are three in the family so, the holidays, hotels to book, restaurants, in short, whatever we have always tried to organize in dog friendly places where we could all be together. I admit that the only time we didn’t bring it is a week in the Maldives during our honeymoon, it was with my mom that we heard every day to know how she was. In short, this is to make you understand how we are. Albert is a crossbreed that unfortunately for a few kilos exceeds the maximum weight of the allowed to take him by plane with us (the limit in most Italian companies is 8/10 kilos including the cage, he weighs 12) and the idea of putting him in the hold of the plane, in the middle of the suitcases, 9 hours of flight, alone, with limited air, treated as a piece of luggage, leave it only from the time of check-in hours before departure, locked in a cage. But as if it wasn’t enough reading on the internet how many stories of dogs / cats who died for being in the hold? For lack of oxygen? To risk Albert’s life even if it were a small chance? Never! And that’s when we found the solution! Curnard! Cunard is an ultra luxurious transatlantic cruise, the only difference from a normal cruise is that for obvious reasons there are no stops, traveling in the middle of the ocean. The ship departs from Southampton, England. So we arranged this trip in detail about six months before, we took the tickets for the ship, and we asked friends and family who had the pleasure of sharing the trip by car with us so we could accompany and then come back with our car. Some of our friends were super available and we did 14 hours and a half by car, traveling during the night and taking turns in driving and to have moments of rest (I was not driven, there were already men 😉 ) anyway we left on the 17th from home, we stayed in a small hotel near the port and on November 19 we embarked on our adventure. The ship does the same route as the Titanic, but don’t get upset. It’s beautiful, super luxurious, has large cabins and with every comfort imaginable. You can eat 24 hours a day. Food quality and that changes every day, there is either the buffet or the a la carte restaurant, all in the price. The nice thing is the area of the dogs, which in the end is why we and other owners of 11 other dogs took us there! Unfortunately the bad thing is that your 4-legged friends can not stay with you in the cabin, that is not, but they have this area dedicated to them. They are berths/cabins where they are going to sleep.

Unfortunately at first I did not take very well the separation from my little 8pur knowing that he would not be with us), considering that he besides staying with us all day, he sleeps in bed usually clinging to me and the idea of putting him in a metal cage made me drop two tears. I must say, however, that it is a matter of habit, both for us and for them, already because even in the days with the roughest sea, where my husband also had seasickness, Albert has never suffered, even with the storm he and the other dogs felt nothing. It may also be because the area of the dogs is located in the area behind the ship, which remains more protected, on the contrary we as cabin were rather in front. And you may ask yourself: But how does it work? Then there are usually guys from the Philippines who take care of them, and we masters had visiting hours that were three times a day for a couple of hours. Morning, afternoon and evening. In those moments the dogs were taken for a walk in the outdoor area, to make them do the needs for the collection of which the boys who take care of the dogs take care of. Then there is the internal area where there are comfortable sofas and armchairs where you can spend most of your time with our dogs (also because outside in November we say it was not hot). Then there is the time for food twice a day, and the Cunard boys take care of that too, they ask you to leave before the brand of dog food and if it is one of the main brands they even provide you with it, and every day they give you either fresh salmon or chicken. Albert always ate salmon and of course he was crazy about it. All in all, it was extra luxury for him too.

Of course there was always that moment of sadness after visiting hours, or at night when he was not with us, but we knew that he was in a warm, safe place, where he was well and in the company of other friends. Although he doesn’t get along with other dogs, we always managed not to make him argue. The maximum limit of dogs is 12, so for this you have to book first, to be sure you have the berth, of which there are two sizes, large or small. For us humans instead? There is everything: cinema, theater, reading rooms, rooms for board games, indoor pool, outdoor pools, whirlpool, sauna, in short, any kind of comfort. There were various themed evenings, such as the 1920s evening or the gala evening. But we spent most of our time eating (really good food) and going to our puppy. You can not hear the time zone, because the time changes by one hour, once a day and is super positive! When you pass the area where the Titanic sank it’s exciting because a siren sounds and the commander tells the story, like goose bumps. We also managed to see a whale, dolphins! I relaxed a lot to see the sea and only the sea for a whole week. The ship for how big it is makes sure that the waves even if there is a storm feel very little and I also enjoyed myself and I could sleep better with a few waves that rocked me. The most beautiful part is the arrival in New York with the ship, to see the statue of freedom slowly become larger and larger along with the buildings! And live this experience as it was once done when you wanted to immigrate to the United States, by ship! So you have a dog? You don’t want to put it in the hold of the plane (rightly) travel comfortably and safely and make sure it’s the same for your four-legged friend!